Watch video from the event here.

On Friday, March 13, the Global, United States and South Africa We Will Speak Out coalitions co-hosted a parallel event, titled “Global Faith Perspectives on SGBV,” at the 59th United Nations Commission on the Status of Women (CSW) in New York.

Rev. Amy Gopp served as the panel’s moderator. Gopp is the Director of Member Relations and Pastoral Care at Church World Service as well as co-chair of the WeWillSpeakOut.US Steering Committee.

The panel drew a crowd of over 60, and others joined virtually by livestream. A video of the event can be viewed here, and the panel was live tweeted from the WeWillSpeakOut.US Twitter account using the hashtag #FaithvsSGBV.

The presentations highlighted the diverse experiences and perspectives of a survivor, a practitioner, a faith leader and an academic.

During her presentation, Nikki Rineer of Lancaster, Pennsylvania, provided a survivor’s perspective and stated, “It’s how we listen and how we support that can either deepen the wound or provide the ointment that will move us closer to healing.” She also talked about a recent situation in which a pastor groomed young boys for abuse and how it divided the congregation. “In the mishandling of abuse,” she said, “there are no winners.”

Constance Mogina, HIV/AIDS Development Officer for the Anglican Church of Papua New Guinea, brought the unique perspective of a field practitioner working to raise awareness on prevention and intervention for HIV/AIDS and gender based violence. In Papua New Guinea, 67 percent of women are beaten by their husbands, she said. One of the challenges she faces is that services don’t trickle down in rural communities, and government leaders aren’t interested in learning about how to intervene.

Representing a faith leader’s perspective, Bishop Ellinah Wamukoya—Africa’s first female bishop—of the Anglican Church in Swaziland talked about the Church’s role in responding to violence and highlighted key theological points upholding equality for women. In Swaziland, as elsewhere, she said, culture and tradition are used to justify discrimination against women—despite Biblical teaching and legal rights. “Liberation from sexism must be one of the major preoccupations of the church in the 21st century,” she stated. “If the church recognizes that people are made in the image of God, it cannot accept or perpetuate discrimination!”

Kera Street, a third year doctoral student at Harvard Divinity School, provided an academic researcher’s perspective. She said that a new research project at Harvard Divinity School funded by IMA World Health is digging deeper into the “Broken Silence” report with qualitative data. “We hope this research will empower people to actually take action to go out and end sexual and gender based violence,” she said.

The We Will Speak Out coalitions are grateful to the panelists, the audience and those who joined virtually for making the event an informative and collaborative success!

The Rev. Amy Gopp responds to her calling to the work of Christ by serving as a global activist and peacebuilder—one who through dynamic preaching and creative teaching urges God’s people to engage in compassionate service that imbues hope and empowerment for all.

An ordained minister of the Christian Church (Disciples of Christ), Gopp currently serves as the Director of Member Relations and Pastoral Care at Church World Service, a global and ecumenical relief, refugee, and development agency representing 37 member communions in the U.S. Formerly, she was the Executive Director for Week of Compassion, the mission fund of the Disciples of Christ. Rev. Gopp serves as Vice-Chair of the IMA World Health Board of Directors; Co-Chair of the Steering Committee of the We Will Speak Out U.S. campaign to end sexual and gender-based violence; writer for the Ecumenical One Great Hour of Sharing; and as a Trustee on the Union Theological Seminary Board of Directors.

Amy received her BA in International Relations at the American University School of International Service in Washington, D.C. (1994). Commissioned as a missionary in 1995, Gopp moved from the States to the war-torn former Yugoslavia as a volunteer with Mennonite Central Committee. For four years Gopp lived in Croatia and Bosnia serving as a peace activist aiming to relieve refugee concerns; to promote interfaith dialogue; and to provide education toward conflict resolution. Additionally, Gopp coordinated the award-winning Pontanima, an interfaith choir based in Sarajevo, Bosnia and Herzegovina. Gopp completed a MA in Conflict Resolution at Antioch University in 1998 and an MDiv from Union Theological Seminary in New York City in 2005. Gopp served as Associate Minister for Outreach at Manhattan’s Park Avenue Christian Church (Disciples of Christ), and as the United Nations liaison for Wider Church Ministries, a common ministry of the United Church of Christ and Disciples of Christ. She co-founded the Poverty Initiative, a NYC-based program equipping religious leaders to overcome oppressive economic structures that contribute to poverty in America.

Amy is a frequent speaker, presenter, and preacher and is a consistent contributor to ecumenical and theological publications. She is also co-editor of Split Ticket: Independent Faith in a Time of Partisan Politics and Help and Hope: Disaster Preparedness and Response Tools for Congregations.

Amy and her husband, eco-activist and photographer Frédéric Vigne, live in Kent, Ohio.

Kera Street is a third-year doctoral student in the Committee on the Study of Religion in the Graduate School of Arts and Sciences at Harvard University. Her research interests coalesce, generally, around issues of race, gender, sexuality, and social media, and her current project considers the ways in which contemporary women-only networks in evangelical Christian circles use digital media to form and inform ideals of proper womanhood.

In addition to this research, Kera serves as the Project Coordinator for an IMA World Health-sponsored project on sex and gender-based violence through the Science, Religion, and Culture Program at Harvard Divinity School. Building off a June 2014 study by Sojourner’s magazine of 1000 Protestant pastors’ understandings of sex and gender based violence, the IMA-SGBV Project seeks to extend this work through a qualitative study on how a range of stakeholders and faith communities within the Boston area conceptualize and respond to this issue.

Kera received her bachelor’s degree in Religious Studies from Spelman College and her master’s in Theological Studies from Harvard Divinity School.

Nikki Rineer represents one in four women who have been sexually abused.  Forty years ago a family friend made her a statistic, but there is so much more you need to know about her.  First and foremost she is a follower of Christ.

She has been married to her best friend, Steve for almost 21 years.  Together they parent 3 amazing boys – Evan – 19, Ian – 15 and Brycen – 9. In her professional career, she is the President at Holleran, a national research and consulting firm located in Pennsylvania.  Her heart beats for her family and for the opportunity to build community in both her personal and professional life.

Bishop Ellinah Wamukoya is a born Swazi, married to Okwaro Wamukoya, a Kenyan. They are blessed with 3 adult children and six grandchildren. Bishop Wamukoya graduated from the University of Botswana Lesotho and Swaziland (UBLS) with a B.A. Degree in Humanities and a Concurrent Certificate in Education in 1974). She later left teaching and studied Town and Regional Planning, a profession she worked in for over 25 years.

In 2005, she got the call of the Lord, got ordained into the Diaconate Ministry and was priested in 2006 as a self-supporting priest. In 2012, as she was heading home to retire, she got called into the Episcopate Ministry. She is currently the Bishop of the Anglican Church in Swaziland, the first female bishop in the Anglican church in Africa. 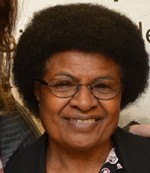 Since 2007, Constance Mogina has served the Anglican Church of Papua New Guinea as HIV/AIDS Development Officer in Dogura Diocese under the Ausaid/Australian Board of Mission (ABM) church partnership program. In this capacity she works to raise awareness on prevention, care and support, and intervention for HIV/AIDS and gender-based violence.

Prior to this, Constance was the Provincial Health Statistical Officer in Papua New Guinea, managing health data records in rural health facilities and providing support to line managers involved in planning and decision-making for the facilities. Constance also belonged to UNICEF PNG for five years, helping rural health managers to incorporate the Integrated Early Childhood Development program into their local health catchment areas. This program aimed to educate communities about the importance of early childhood through making households “fit for children” to live and grow in.

Constance dedicates her own time to teaching young adults in the community important life skills such as sewing and cooking.